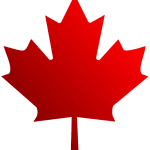 The Bar Chart question asks you to summarize a bar chart. These diagrams are also called bar graphs. They are often used to show changes over a period of time, so when you think about your presentation, your focus should be on the changes that you see over the identified period.

A typical bar chart question for CAEL Speaking Task 3 looks like this:

Your professor shows you an image of the results of a survey conducted by a personnel department at a major company. The survey was carried out on two groups of workers: those aged from 18-30 and those aged 45-60, and shows factors affecting their work performance.

Describe and explain the information depicted in the graph. What conclusions can you draw?

In the Bar Chart Sample Answer below, you’ll see that the presentation is clearly divided into five parts. The introduction, overview, trend 1, trend 2 and a closing remark. You need to include all of these components in your presentation.

Overall, the proportion of working people increased during the period, with employed women showing the most significant rise.

In all three countries the number of employed men exceeded that of women with Sweden having the highest rate of male employment – approximately 80% in 2005, followed by South Korea with 70% and Canada with 60%. By 2015, Canada had seen the greatest rise to 70%, Sweden had revealed an equal and concurrent drop, and South Korea’s employed men had risen by a mere 5%.

The proportion of employed women was lower than men in all of the countries during both years. It was below 50% everywhere in 2005, but the figures had risen by 2015. By then, over half of Canadian and Swedish women were working. South Korea’s numbers were significantly lower, rising from 30% in 2005 to 35% in 2015

In conclusion, we can say that while all three countries witnessed an increase in employed women, South Korea was the only country where over twice as many men as women were employed during both years. 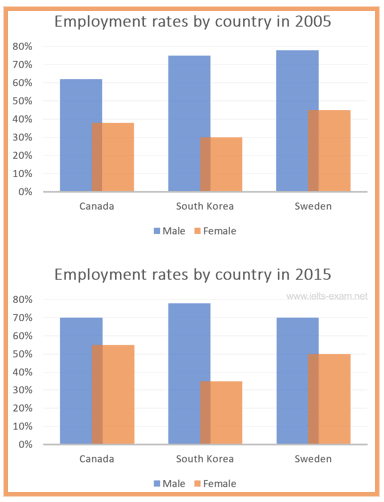 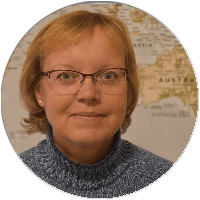 Please call/text or contact Angela if you’d like a little tutoring to help you prepare for your IELTS Test.

You might also want to consider participating in one of our workshops that focus on common areas of difficulty.

For a free evaluation of your response, put it into the comments box below. For feedback, please use our writing correction service.